From Ukraine to Latvia: In Love and Deeds

By Mauro Martinez, Baltic School of Ministry
As a former Soviet Union country, Latvia’s population consists of many people from Russia, Ukraine, and Belarus. Since the conflict began in Ukraine, we let local people know (especially those with family in Ukraine) that the Baltic School of Ministry (BSM) was open to receiving refugees. Soon enough, one of our former students created a Whatsapp group, “Welcome to Latvia,” to help with the organization as the communication was very chaotic due to the war. That Whatsapp group connected people who wanted to flee Ukraine with those willing to receive them in Latvia and helped coordinate transport for them. We got hundreds of messages every day as we tried to decide how many people we could accept and how we could help. There was not too much time to think. In only four days, we were told that a mother (in a wheelchair) with three kids was on her way to us. Moreover, they arrived two days earlier at 2am due to a miscommunication.
Refugees did not have much time to think either. One woman told us she had to decide whether to leave the country in 15 minutes. When she saw the Russian planes flying around, she knew there was no time to think. One hour and a half later, she grabbed what she could and got on the bus on her way to us. 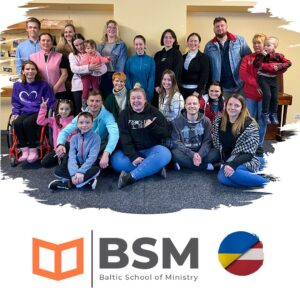 Since the refugees we accepted are not Christians, local churches have tried to connect with them and invite them to their services. It is a joy to see that some have quickly accepted the invitation. Not only did they express their desire to attend services, but they also asked for ways how to get involved in serving. Simply inspiring!
At the moment, our task mainly consists in helping them get all documents done, driving them to the migration department, finding a kindergarten for the kids and a School for the teenagers. We were also able to find a job for one of the women as she is a teacher, and local Schools are opening special groups for refugees.
At BSM, we are currently helping fourteen refugees. That makes a total of thirty people living at the School altogether, counting refugees, students, and staff (classes still go on). The building is almost complete, so sadly, we are not planning to accept more refugees at the moment. It is also a challenge to think ahead. How long will they stay? How can we help them if they decide not to return after the war? Nobody knows that. One thing we know: we are trying to be light in the midst of such terrible darkness and to bring the hope we once received from our Savior, Jesus Christ.
Finally, I would like to share one of the messages from that Whatsapp group sent by one of the contacts who sent us refugees. It is in its original language (Russian) followed by the translation:
“Я так вам благодарна за помощь нам, дорогие сотрудницы и сотрудники на ниве Божьей! Я прямо поражаюсь вашей отзывчивостью и любовью, которая не на словах, но на деле!!! Не устаю славить за вас Бога!”
“I am so grateful to you for helping us, staff and workers in God’s field! I am amazed at your responsiveness and love, which is not only in words; but in deeds! I can’t stop praising God for you!”
We are encouraged by such words and filled with God’s energy to keep serving.