A New Home in Guatemala

Gladys and her four children lost everything when Guatemala’s Fuego Volcano erupted last year. The eruption killed hundreds and displaced thousands. Gladys and her children escaped with their lives, but like many others, their home was gone.

But last month they were presented with a new home, built in partnership with Missionary Ventures, Catalyst Resources International and a team of men from Rockpointe Community Church in Michigan. 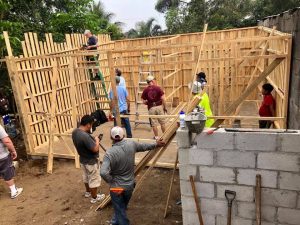 For one hot and humid week in the coastal area of Guatemala, the team constructed a sturdy two-bedroom home for the family. They even added a bathroom and porch area.

“It was such a joy to be able to help a family that has been through so much recently,” says MVI missionary Brenda Purcell. “Together, God’s family blessed far away believers in a way that will meet a very basic need and also be an encouragement to them.”

Beyond just building the house, the men spent time with the family, encouraging them, praying for them, and helping Gladys’ 12-year-old son, Eric, have a hand in building his own home.

“Shortly after the volcano erupted and they lost their home, his father left the family,” explains Brenda. “The Rockpointe guys poured into Eric and allowed him to be part of building his home and showed him the skills of building a house. I believe that his life was changed from being around these godly men!” 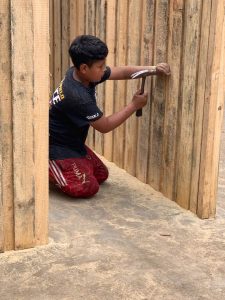 Team leader Pastor Rob Markus explains more. “As dads, we knew how important it was to give Eric more than a home. We wanted to instill in him the pride of knowing he had a hand in building his home. Eric had never swung a hammer, so we taught him, and we taught him how to level things up and how to mix concrete. All the final nailing was done by Eric, because God didn’t just call us to build a home, but also restore and build a boy into a man.”

“This is a God project with many great people He has touched to bring it all together,” says Brenda.

There is another story, behind the scenes, connected with this house. Some of the funding came from a family in Florida who decided to forego Christmas gifts in order to contribute to the rebuilding efforts in Guatemala. Their sacrifice and love for others goes beyond just one family’s house. They have made an impact for eternity. 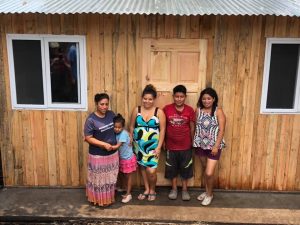 “I’m really thankful to our heavenly Father, that God has brought angels to help us,” Gladys said when the team gave her the keys to her new house. “We thank the people who have contributed to this and for all the effort that you’ve given. Here in this place, where there’s a lot of people who feel like they’ve been forgotten by God, we know that He never forgets us.”

Watch the video of the men from Rockpointe presenting Gladys with the keys to the house.

Ready to serve like the men at Rockpointe? Check our our trip opportunities.