Monday in the Jungle 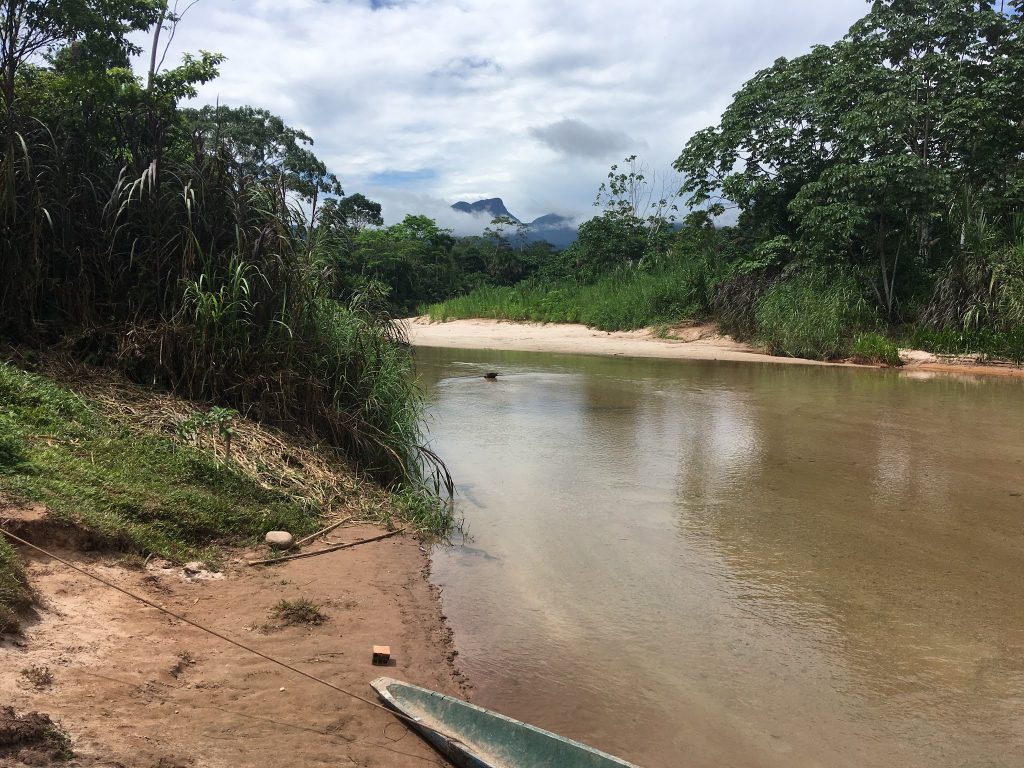 I crawl out from under my mosquito net and look around. It is still dark with just a hint of pink in the east. I do not know what time it is, as I never look at my watch. I am on the porch of a simple house, an elevated wood floor and no walls, where I slept with 10 other people. They are all awake, rolling up their mosquito nets and packing up their blankets. They are from different villages and walked here for a three-day discipleship training. It finished last night with a church service that ended around midnight.
I am in the village of Nuevo Lamas. It used to be called San Francisco but last year they were registered as an official indigenous community and changed their name.
I walk down to the river. It is a Shawi custom that when you wake up in the morning you go to the river and wash your hands and face and brush your teeth. I stand in the calf-deep crystal-clear water and take in my surroundings. The river winds off, lined by massive trees. In the distance, the mountains glow pink in the sunrise. Yes, this is definitely not a typical Monday morning.
After a light breakfast of chicken soup, boiled plantains, and a bowl of chicha (boiled corn drink), we are ready to head out. We have an 8-mile hike.
We arrived on Thursday by canoe. We were bringing food and supplies for the training and it was not possible to carry them in, so we had to use a canoe. But the river was very low, and we ended up pushing the canoe most of the way. At one point, one of the Shawi pastors I was traveling with looked at me and said, “Is the canoe bring us or are we bringing the canoe?” We had a good laugh.  It didn’t rain while we were in the village and the river had dropped more. Now we are walking out. 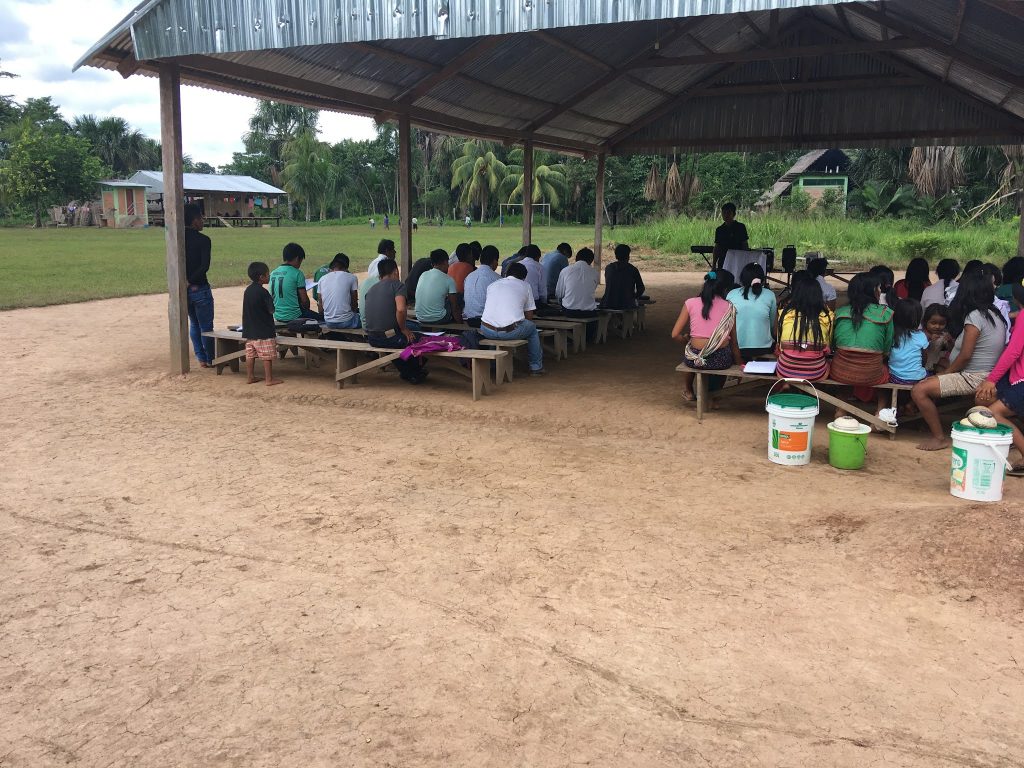 As we settle into the hike and the sweat begins to pour, I begin to reflect on the past three days.
The three-day training was for new believers. Over 40 people attended. I, along with three Shawi pastors, taught the course. The truth is they taught most of it and I told Bible stories. We started at 8am and went till 5pm with a break for lunch. In the evening, we had church service from 7pm until 11 or 12pm.
The highlight of the weekend was the session we did on Biblical marriage. It was very culturally appropriate and included ideas like treating your wife with love and respecting your husband. They had never heard such teachings. Traditionally the husband orders his wife around and the wife yells at her husband and kids. Unfortunately, violence in marriage is commonplace. The idea of a peaceful, loving marriage was something they were all very excited about. When the topic turned to sex, it became very interesting. They all began to laugh with embarrassment as it is a topic they had never talked about. Sex education does not exist in the jungle. With lots of laughter, the pastor explained that there are biological and emotional differences between men and women. The conversation became more graphic than I will share here but one young, newly married man came up to me and whispered, “This is so good, I never knew any of this.” 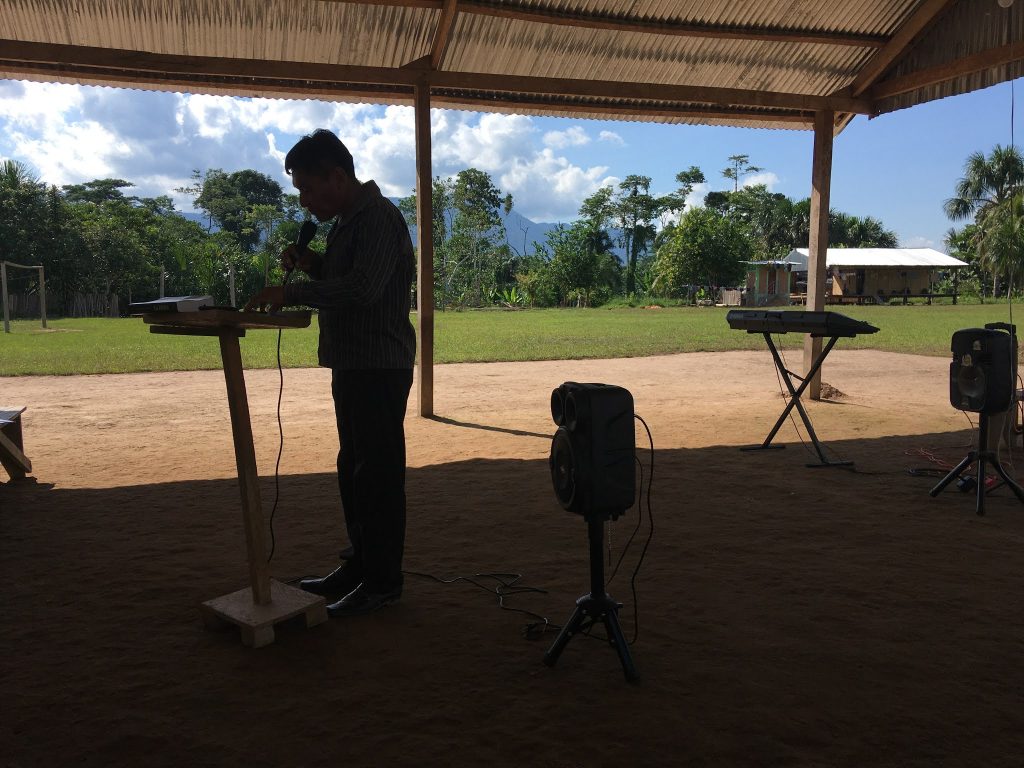 Suddenly on the trail in front of me the pastor steps on a log and from underneath jumps out a four-foot snake. I am startled and jump back. The pastor looks at it and tells me not to worry, as it is not dangerous. We pass it and continue on. I have learned that when the Shawi say don’t worry then I shouldn’t worry, but if they are worried then there is a good reason. Like on Saturday night, after classes in the afternoon, we walked to a nearby village to visit with some new believers. We sat in their house and talked together as everyone was drinking chicha. It was a good visit as we talked about life and encouraged them in their new faith. But we got a little long winded and found ourselves walking back to our village after dark. It is Shawi custom that at sunset you walk to the river and take a bath. Since we had arrived late, we found ourselves bathing in the dark. It was the most beautiful bath ever. Standing in the dark, cool water, looking at the sliver of a new moon, watching the lightening flash in the distant mountains, it was breathtaking. But then on the walk back from the river, the pastor in front of me suddenly stopped in the trail and pointed his flashlight at a small red and black snake in the trail. “Be careful hermano,” he said, “It is poisonous.” He looked around for a stick to try and kill it. By the time he found one, it had already slithered off into the jungle.

Back on the trail, we arrive at the village of Santa Rosa. As we walk through the village, I look at the new church building and think of how God is moving throughout this whole area. Four years ago there were no believers in this entire area. A pastor had been visiting Nuevo Lamas (San Francisco) and was so excited to share with me when two families had come to faith in Christ in that village. A small church was planted and we began discipling the new believers. They began to share their new faith with neighbors and friends and family. The good news spread slowly at first but then, this past year, it picked up steam. Today there are five new church plants within an hour walk of Nuevo Lamas.

Passing through Santa Rosa we come to my favorite part of the hike. A long stretch of trail that is on a cliff overlooking the river. Here the trail is wide and dry and lined on each side with massive virgin growth trees. The towering trees shade the trail, making the hike very enjoyable.

I reflect again on the past few days and I remember the church service Friday night. We invited those who needed prayer to come forward and an 11-year-old girl came forward holding a baby. Through an interpreter she asked for prayer for the baby, stating he was abandoned and sick. After the service ended, I asked more questions about the baby. The mother of the baby was a single mother of three. She “found a man” and they decided to live in another village, leaving the children behind. Unfortunately, this story is common in the culture. It is a big sacrifice to care for a child and a man that marries a single mom will often tell her to leave the children behind. The children often end up with a grandmother but others are left to die. The next morning I took a closer look at the baby in the daylight. He was around one-year old and had some kind of skin problem as there were sores all over his body. He was malnourished and his arms and legs were skin and bones. He was lethargic in his movements and I was worried. The 11-year old girl was feeding him handfuls of rice. I asked who was taking care of the children and they said that the other kids were with the grandmother but she was too old to take care of a baby so the 11-year old, his aunt, was taking care of him. They also said the grandmother was trying to give the baby away to anyone who would take him, so they encouraged me to just take him. I informed them that I could not just take a random baby and walk out with him. But I promised to look for a solution. As I walk along the trail I pray for the baby and I pray for a solution. As I pray I examine my heart and find that I have become desensitized to situations like this. The truth is, I have seen other children like this. We have been able to help some, others we have not. I pray for God’s help to not be desensitized to the pain and suffering all around me. Renew my passion for the hurt. Give me your heart. 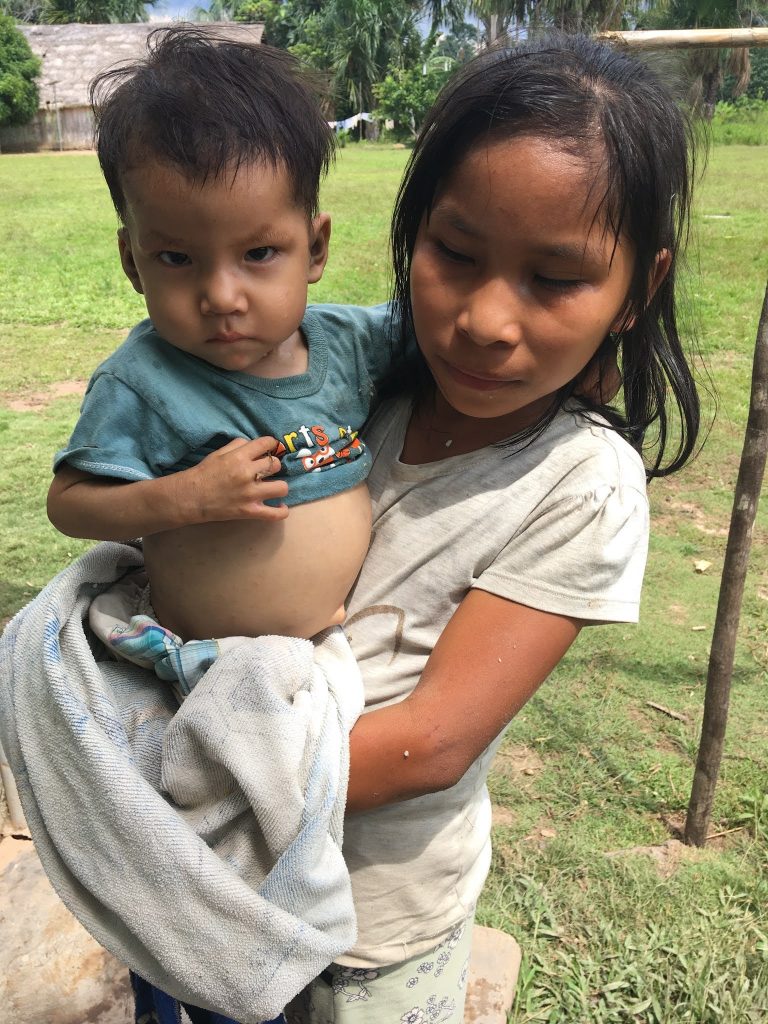 We come to my least favorite part of the trail, fording the Porotuyacu River. Everyone waits for me take off my shoes and socks as everyone else is barefoot and then we wade out into the dark and murky water. The water is ladened with sticks and sunken logs, making the crossing slow. The worst part is that the trail is not straight on the other side of the river and we have to cross and then walk through the water about 200 yards downstream to pick up the trail again. Fortunately the water is low today and only comes up to my thighs. 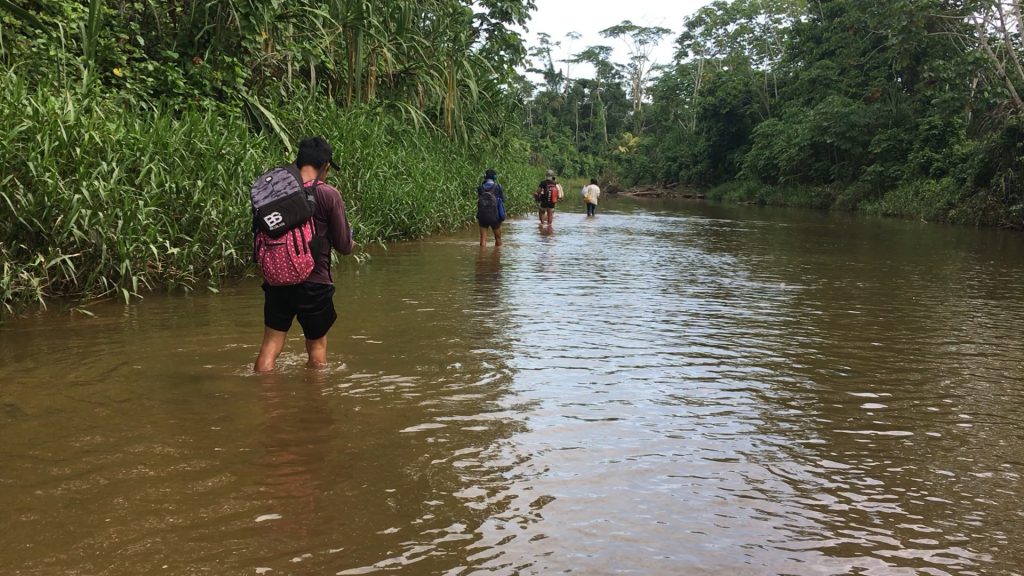 On the other side of the river we cross paths with Abram, a new believer. He asks where we are coming from and we explain we are returning from the training. He is visibly disappointed as he normally comes to the discipleship but said he did know about it. I explain that we put an announcement on the radio for all to hear. He tells me he doesn’t own a radio. Communication is hard in the jungle.

We finally arrive to Nueva Arica, where I parked my truck. I still have a two hour drive on a dirt and mud road back to Yurimaguas. Some of the believers climb into the back of the truck. I will drop them off in their villages on the way back to town. I start the truck and the clock says 9:07am. Yes, this is definitely not a typical Monday morning, but I praise God that this is where He has called me to be. What an honor it is to see His mighty works first hand!

This is just one example of what Missionary Ventures is doing around the world to impact nations for Christ. You can help us continue that work with your support of our Core Mission to empower more people in God’s kingdom.